An Italian Holiday Home for One Euro – Read, listen and learn a little English! By Azotoliquido (Own work) [GFDL (http://www.gnu.org/copyleft/fdl.html)

Picturesque- pretty
Too good to be true– unrealistic, unbelievable
Catch- a slight problem
Renovate- repair and restore
Within- during this time
Came up with- thought of
Poverty- poor economic conditions
NEW:  TINY TEXTS VOCAB CHALLENGE CARDS

Do the takeaway test: An Italian Holiday Home for One Euro.

Open Offices Could be Bad for your Health – Read, listen and learn a little English!

Do you work in an open plan office? If so, it may be damaging your health. A recent study of employees in Denmark found that people who work in open spaces take significantly more sick leave. The biggest problem with the open office is simply noise. In another study by the Cornell University psychologists Gary Evans and Dana Johnson, clerical workers who were exposed to open-office noise for three hours became less motivated and less creative. The open office was invented in Germany, in the nineteen-fifties, to facilitate communication and idea flow but recent evidence suggests that the opposite is true.

Do you work in an open office?

Do the takeaway test: Open Offices Could be Bad for your Health

Silent Disco is too Loud for Salzburg – Read, listen and learn a little English! The city of Salzburg has refused to renew a licence for a silent disco after complaints that it was too loud and wild. At a silent disco people listen to music on wireless headphones, broadcast via a radio transmitter. If you don’t have headphones, it just looks like a room full of people dancing to no music. However the Mayor of Salzburg, Heinz Schaden, said it was still too loud for residents who like to sleep with their windows open in summer. They are upset about young people coming and going, late at night.  If the city refuses to renew the licence, the owner says he will organise a “silent demonstration”.

Do you agree with the Mayor?

Do the takeaway test: Silent Disco is too loud for Salzburg

Original article from The Local, Germany

Traditionally, authors use words to create emotions in their readers. Researchers at Massachusetts Institute of Technology have created a new ‘wearable’ book to enhance this experience. It allows the reader to feel the protagonist’s emotions physically. Using a combination of sensors, the book triggers vibration patterns through a special vest. The vest also contains a personal heating device to change skin temperature and airbags, which tighten or loosen it. It’s the first ever book that can give the reader a virtual hug.

Do you need a hug from a book?

Do the takeaway test: Wearable Books

14 Year-old Boy Could Save U.S. Millions – Read, listen and learn a little English!

A 14 year-old boy of Indian origin has come up with a clever plan, which could save the U.S government up to $400 million per year, simply by changing the font they use on official documents. Suvir Mirchandani had the idea while thinking of ways to cut waste and save money for a project at school. He noticed that his school used a lot of handouts and considered recycling to save paper. Suvir also wanted to find a way to cut down on ink, which, he says, is twice as expensive as French perfume. He experimented with different fonts and found that Garamond uses 24% less ink. It is incredible to think that such a small change could result in such a huge saving.

Do you use a lot of ink and paper?

Do the takeaway test: 14 year-old Boy Coud Save U.S. Millions 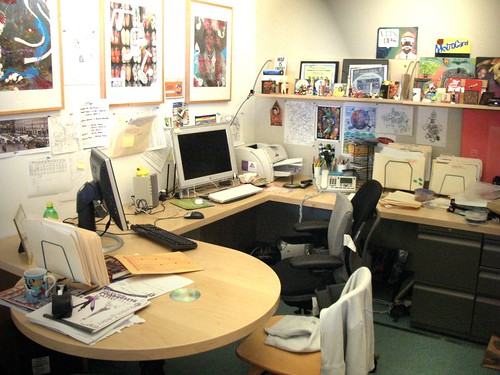 According to Kathleen Vohs, a marketing professor at the University of Minnesota, working in a messy space can boost creativity.  In an experiment, she put 48 people into messy or tidy rooms, and asked them think of new uses for Ping-Pong balls.  The people in both rooms came up with about the same number of ideas, but, the messy room subjects came up with more highly creative ideas; five times more to be precise.  So, do you need to make your workplace messier?  Maybe not!  When interviewed by Inc. Vohs agreed that a messy room may be best for brainstorming, but an orderly setting might be better for a fast meeting where a quick decision is required.

What’s your way to stay creative?

Do the takeaway test: Mess Makes You More Creative

Montreal company is showing how cities can feed themselves with rooftop gardens. Lufa Farms, founded in 2009, built the world’s first commercial rooftop greenhouse in 2011. Customers order on-line, the food is harvested in the morning and delivered a few hours later to pick-up points around the city.  So there is no waste.  For $30 a week, customers get a weekly basket of fresh organic food.  As the world population continues to grow, good farmland is rapidly disappearing. Farming on rooftops gives urban residents access to local produce that they would otherwise have imported from hundreds of miles away.

Do the takeaway test: rooftop vegetables Recently a story began spreading via social media that knitters were needed to make sweaters for penguins hurt in an oil spill.  Soon, some people claimed it was a hoax.  In fact, it seems that the sweaters will not be worn by real penguins, but by toy penguins.  However, these toys will be sold to raise funds for the penguin foundation.  So if you really want to knit a penguin sweater, go ahead — but bear in mind that the cost of shipping it to Australia won’t be cheap.  Alternatively, you might just want to donate some money directly to the Penguin Foundation or even adopt a penguin.

Spreading- being passed from person to person
Sweaters- pullovers, jumpers
Oil spill- accidental release of oil into the sea
Claimed- said
Hoax- a fraudulent story
To raise funds- to collect money
Go ahead- just do it
Bear in mind- consider
Cheap- inexpensive

The Battle of the Oranges – Read, listen and learn a little English! The Italian town of Ivrea is preparing 500 tonnes of oranges for its annual Carnival festival.  The oranges aren’t for eating, however, they are for throwing.  In fact, teams of locals will re-create a historic battle between the townsfolk, on foot, and a ruling tyrant and his men, in carts.  The oranges, which are leftovers from the winter crop, are thrown at full force and bruises and other injuries are not uncommon.  Spectators who don’t want to be pelted should wear a red cap at all times.  It’s a colourful, cheerful and deliciously orange-scented event.

Do the takeaway test: The Battle of the Oranges

Woman Walks off Pier Because… – Read, listen and learn a little English! A tourist from Taiwan had to be rescued after falling off a pier in Melbourne, Australia because she was checking her Facebook page.  The woman, who couldn’t swim, was taken to hospital for a check-up but was unhurt.  Incredibly, she didn’t even lose her phone: she kept hold of it throughout the ordeal.  According to research, accidents like these are on the rise.  The age group most at risk for cell-phone related injuries while walking is adults under 30.  Other incidents include walking in front of moving traffic and falling off bridges.  The senior police Constable in Melbourne warned people to pay more attention when using social media around water.

Rescued– saved
Pier– wooden structure leading to the sea, where boats are secured.
Check-up– medical examination
Unhurt– not injured
Kept hold– did not drop
Ordeal– bad experience
On the rise– increasing
At risk– in danger

Do the takeaway test: Woman Walks off Pier Because…